Paris, France — Based on three years of observations from the SCIAMACHY instrument aboard ESA's Envisat, scientists have produced the first movies showing the global distribution of the most important greenhouse gases – carbon dioxide and methane – that contribute to global warming.

The importance of cutting emissions from these 'anthropogenic', or manmade, gases has been highlighted recently with European Union leaders endorsing binding targets to cut greenhouse gases by at least 20 percent from 1990 levels by 2020. Further illustrating the urgency to combat global warming, Britain became the first country last week to propose legislation for cutting the gases.

Careful monitoring is essential to ensuring these targets are met, and space-based instruments are new means contributing to this. The SCIAMACHY (Scanning Imaging Absorption Spectrometer for Atmospheric Chartography) instrument, for instance, is the first space sensor capable of measuring the most important greenhouse gases with high sensitivity down to the Earth's surface because it observes the spectrum of sunlight shining through the atmosphere in ‘nadir' looking operations.

Dr. Michael Buchwitz and Oliver Schneising from the Institute of Environmental Physics (IUP) at the University of Bremen in Germany, led by Prof. Dr. John P. Burrows produced these maps based on SCIAMACHY observations from 2003 to 2005.

Although carbon dioxide is the most important greenhouse gas, methane molecules trap heat with an efficiency that is 20 times larger than that of a molecule of carbon dioxide. Also, emissions from methane – the second most important greenhouse gas – may significantly rise in the future due to global warming if methane is released from currently frozen permafrost areas.

The new methane data also confirm findings from another study in 2005 carried out by the Institute of Environmental Physics (IUP) at the University of Heidelberg in cooperation with the Royal Netherlands Meteorological Institute (KMNI) of larger than expected methane emissions over tropical rainforests, which differed from model simulations of the same period.

Data from SCIAMACHY is being provided to the GMES Service Element for Atmosphere PROMOTE, which delivers policy-relevant services on multiple atmospheric issues to end-users. Feedback from these users is helping the scientists at the University of Bremen to improve their algorithms further, which is essential for reaching the accuracy level of 1 percent needed for SCIAMACHY to retrieve information on greenhouse gas sources and sinks. 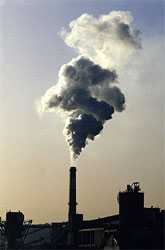 Buchwitz and his colleagues used SCIAMACHY data from the same period to retrieve the columns of carbon dioxide, which occurs naturally as well as being created through human activities, such as the burning of fossil fuels.

As with methane, there are significant gaps in the knowledge of carbon dioxide's sources, such as fires, volcanic activity and the respiration of living organisms, and its natural sinks, such as the land and ocean.

By better understanding all of the parameters involved in the carbon cycle, scientists can better predict climate change as well as better monitor international treaties aimed at reducing greenhouse gas emissions, such as the Kyoto Protocol which addresses the reduction of six greenhouse gases including methane and carbon dioxide.

With climate change being the greatest environmental challenge facing the world today, numerous studies and results on greenhouse gases will be presented at the 2007 Envisat Symposium in Montreux, Switzerland, from 23 to 27 April.